Review of Blood and Plunder

Readers of this blog will know that I have searched for a set of pirate rules to suit my tastes. The closest I’ve found so far have been Donnybrook, although even they fail in some regards. I have started writing my own rule set (still at a very early stage) but I heard about another possible recent candidate, Blood and Plunder (Firelock Games, 2016) (B&P). I duly bought a copy and have been trialling them for the past couple of months. 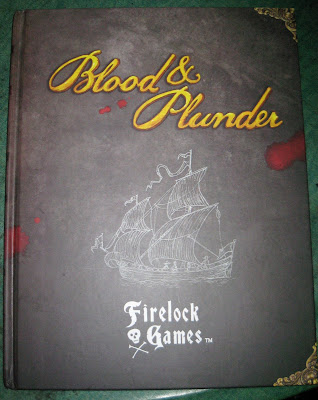 So, what do you get for your money? A hardback A4 book with 157 pages that is well written and produced, that contains many excellent diagrams, illustrations and photos throughout. I am no expert on pirate history, but the authors include a good amount of historical background and detail. The period covered is that of ‘early’ piracy (late C17th), when forces used matchlock muskets, with some firelock muskets and pistols. My interests (and figures) are from a latter period (early C18th) when flintlocks had taken over, but the rules are easily adapted to cover this change in technology so this does not present a problem. There are four potential factions available: English, French, Spanish and Unaligned ‘Pirates’. Each faction has two ‘core’ unit types and two ‘support’ unit types, and these vary between the factions due to differing stats and special rules. The force leaders come in three levels (untested, experienced, and seasoned), additionally there are named historical characters available. The rules suggest a ‘standard’ force of 200 points, which generally comprises roughly half a dozen units each with 6-12 men. All the games I have played so far have used this ‘standard’ force size, which matches the size of game I wish to play, and I have no experience of how the game scales up or down. The rules do come with a range of scenarios and can be fought as a simple land-based game, an amphibious game or a ship versus ship game. I have only played land-based games, but have used some printed ship gaming boards to play out boarding actions (the photos are from such a game). I have not used the sailing and ship gunnery rules, so cannot comment about these aspects of the rules. 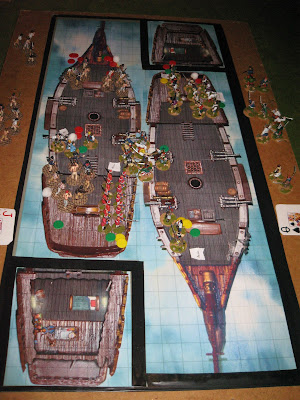 Command and control uses playing cards to determine unit initiative with higher suites going first, but the lower suites tend to give more actions. Better quality units generally have more actions. Players have a hand size equal to the number of units, therefore choosing the order to play cards is important. Firelock Games do produce themed B&P card decks but I cannot see why players would go to the unnecessary expense to buying them. Commanders can give extra actions to units within their command range which is a powerful mechanism. The range of actions available are straight forward, some are single ‘dedicated’ actions whilst others are ‘standard’ actions (e.g. move) which can be used multiple times in an activation. Movement is in blocks of 4” increments and poor terrain reduces the amount by 1”, which I found rather too little. 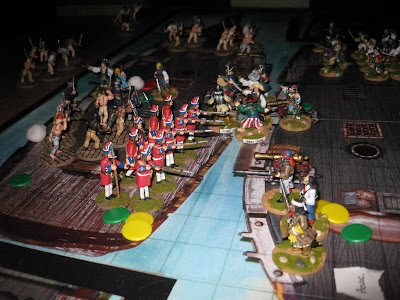 Shooting and melee use similar mechanisms with D10 dice: Roll to hit followed by a saving roll to determine casualties. Hits, even if saved, cause a ‘Resolve’ test to be made by the target unit, which may result in accumulation of ‘Fatigue’. Fatigue can result in less actions in future turns and finally result in the unit leaving the table, but Fatigue can be rallied off. I thought this simple morale mechanism worked well in the games played and differentiated units in terms of quality. Again Firelock Games produce special dice to record Fatigue but other markers work just as well. I also thought the reloading mechanism worked well; two smoke puffs when unloaded, which are removed by using actions. If a unit has a single puff, it can fire with half number of figures. Pistols are usually single use weapons, often fired only before melee combat. Both shooting and melee tend to be bloody affairs with units losing figures at an alarming rate, therefore games are short and quick! All units have ‘special’ rules which modify their behaviour in combat, and these ‘special’ rules are the primary source of theme or flavour within this rule set, and need to be constantly borne in mind by the players. Finally another mechanism I liked was the use of ‘Fortune’. Each player starts with 3 Fortune markers which are essentially ‘Mulligans’ that can be used to re-roll a particular set of dice whose results you as a player did not like. When and where to utilise this Fortune is important; use them too early and you can find yourself stuck with a bad roll at a bad time latter in the game!


To conclude, I think these are a well produced set of rules that give a fast paced, simple, easy to understand game that has a reasonable amount of theme. I need to qualify my statement by saying that I have not played with any of the naval sailing rules (which comprise a significant part of the rules), and I have not played with the Spanish factions that include lancers and indigenous natives. I think the peripheral items Firelock Games produce are not required by most gamers. My interests lie in a slightly latter period of history and I hope the publishers produce additional material to cover this in the future. If the late C17th period is your thing, then the factional packs of figures associated with B&P will clearly be of interest, and the unusual natives etc. would be good to get and play with. At the moment I think I rate these rules slightly higher than Donnybrook because the game play is faster and the theme is more focussed, but I would still like more pirate flavour to the rules. I am still encouraged to attempt to write my own rules.
Posted by Snowydog at 08:02 No comments:

Email ThisBlogThis!Share to TwitterShare to FacebookShare to Pinterest
Labels: Pirates

Continuing on from my last post, the second and final batch of Battlelore figures have been completed. The speed of painting was again aided by the use of washes, which I find work well on barbarians, beasts and skeletal models. The biggest hurdle was painting the armour areas on the knights in particular. Unfortunately the clear plastic rod keeping the dragon model airborne snapped during assembly! I considered drilling out the recesses and using a spare rod, but after some reflection decided to instead mount the model grounded on the base. This is a more sturdy solution because I find flying models of all kinds tend to be those dropped and broken during play. 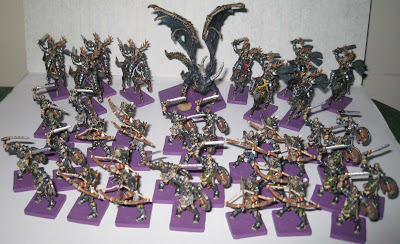 So, my painting pile is again reduced. Luckily I plan to attend the Warfare show next weekend where I can stock up for the winter months.
Posted by Snowydog at 01:27 No comments:

I occasionally play a game or two of Battlelore 2nd Edition. Back in early 2016 I painted the plastic figures for both core armies; they look very good. I had also bought the undead (Waiqar) expansion packs but did not paint the figures immediately; I was suffering from overload after painting the core armies! Anyway, when I decided to give the game another outing recently, it became apparent that you cannot play a painted army against a purple plastic army; it just doesn’t look right! So I had to get these figures painted. 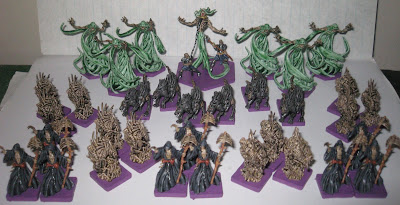 Normally I start with the ‘grunts’ of the army but this time I got the more exotic units out of the way first. The Banshee and Wraiths were simple paint jobs using some green ink wash over a light grey base; I cannot recall why I had this wash in my paint tray but this seemed a good use for it! I think the effect is very nice. The Bone Horrors were also simple, just a grey/brown ink wash over an ivory base, which really picks out the detail. The Barghests (Dire Wolves) and Necromancers were also really easy paint jobs. So, I managed to complete half the total army in less than 10 days!

I am now left with the skeleton core units, plus a rotting dragon, before the undead army is finished. I hope get these figures out of the way by mid-November, when the Warfare show in Reading is scheduled. Then I can buy some more interesting historic figures to build up my lead mountain for the long winter months ahead!
Posted by Snowydog at 07:36 No comments: