The on-going heat wave has put a dampener on both my gaming and painting efforts, but the visit to Attack last weekend has encouraged me to start again. 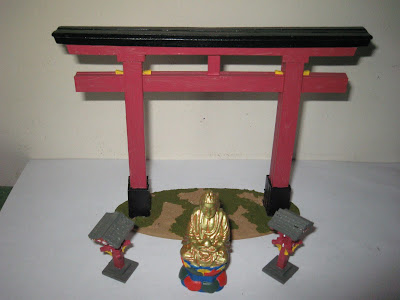 I want to further jazz-up my Samurai table top. So, I bought a mdf Torii gate and lanterns made by Blotz, and a Buddha statue produced by Ainsty. Construction was very easy and they painted up OK, maybe the red is duller than I intended. 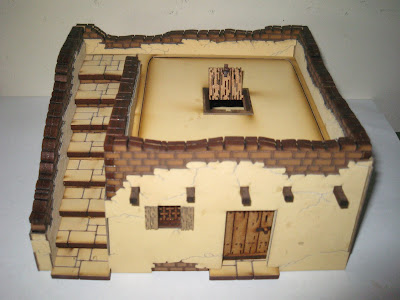 I also purchased an Arab dwelling from 4Ground. I really enjoy putting these kits together, and this building was no exception. The double thick mdf of the main walls means they are sturdy, and applying the thin third layer on the outside gives a nice contrast between the brick and plaster work. There were no fiddly bits, and the door and hatch open/close well. I thought the stairs may prove difficult but they went together surprisingly easily. When I finish a 4Ground model I just immediately want to do more, so an order may be placed at the weekend if I get lucky on the horses (I’m off to Newbury races on Sunday).
Posted by Snowydog at 07:31 No comments:

My ‘local’ club in Devizes held its annual show, ‘Attack’ this weekend. I might be biased but I really enjoy this type of show; there is an OK range of traders but it does not feel like a manic shopping experience. The number and range of demo/participation games was slightly disappointing this year but none were too flashy and most were within the ability of many gamers to replicate. The best presented was ‘Gettysburg, the first day’ by The Ex-Herford Wargammers, using the ‘new’ brigade level Fire & Fury rules in 15mm. I enjoyed seeing how the action developed over the show. As usual there was a nice Wings of War game (Chris Haigh) running. The most popular participation game seemed to be ‘What a Tanker’ (Boscombe Down and Amesbury club) with many players, young and old, taking part. In addition there were a range of friendly, well attended competition games and the overall attendance was not too crowded, so getting to see and speak to traders was not a chore. I’m always surprised about how little thought some traders put into marketing their wares: simply relying on racks of poorly labelled blister packs with no ‘hook’ to pull punters in! In my experience wargamers are ‘magpies’, so investing in a few displays of well painted miniatures would work wonders, and linking the ranges to popular, established rule sets would also encourage interest. A demo-game utilising your figures would help if it can arranged. It strikes me as bizarre that a trader can put obvious energy and passion into producing figures etc. but pay no attention into selling them and then whine about poor foot-fall and sales! With a little more customer-focus I’m sure returns could be drastically improved. I was shocked that a seller of boardgames had no knowledge of some of the games nominated for awards at the up-coming Essen show, even though these games have been ‘hot’ on Boardgame Geek for months! It behoves traders to keep up to date with what is happening in the hobby, to think about what the customer wants, to display their wares in an attractive manner, and work in a more ‘professional’ manner. Rant over!


On the purchasing front I managed to buy most of what I planned, plus a few impulse buys. The only omission was I could not find a copy of the new Saga Crusader book and battleboards (these will have to wait until Colours in September). I mainly bought odds and ends to add flavour to my games; a few Japanese terrain items, including a Torii Gate, a few civilian figures etc. I could not resist buying a few more Gladiator figures from Black Tree Design. Rather than take a photo of my loot, they will appear on future posts as they get painted.


The B&B at Attack is always excellent, not too crowded with a good range of objects for sale. The only downside is the first floor location gets very hot and sticky when the weather this is sunny. This year I managed to sell a few odds and ends, and the money raised covered all my purchases and left me with a small profit, again! I managed to chat and catch up with many friends, including Graham, who was over from Belgium and playing in the FoW competition (he came 1st, again!).


At the beginning and end of the show I spent a few hours helping to set up and take down the tables etc. I think gamers and traders should more appreciate the amount of effort the organising clubs put into holding such a show; it is not simply a money raising endeavour. I feel more recognition should be given to the organisers and club volunteers who put in so much effort. So, my thanks go to all fellow DDWG members and I look forward to next years show!
Posted by Snowydog at 05:28 No comments:

World Cup final day and France are playing, so we visited Val (French) and Chris for lunch. Val had received a few new games for her birthday, so we started by playing ‘Ra’. 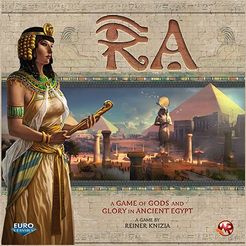 This is an auction game with the objective of collecting various sets of tiles. It is played over 3 ‘epochs’, scoring at the conclusion of each epoch, plus some end-game scores. The theme of ancient Egypt is irrelevant, anything would do as well, but it does provide for some nice artwork and is OK. Normally I’m not a fan of auction games but this one works quite well; each player only has a limited range of bids and can only make 3 successful bids in an epoch. There are some negative tiles which you want to avoid, but players bid on the whole batch of tiles available so choosing when and whether to bid is key. I tended to bid aggressively early in an epoch, getting tiles I wanted but missing out on potential opportunities later on. This tactic seemed to work because I won the game.


We planned to leave before the football kick-off, in time to collect Snowy from doggy daycare and get back for the match. So rather than play a new game, we decided to give Century Spice Road an outing. This is a superb game; fast and simple, with just the right amount of thought required. I’m sure this will become a classic go-to game for many years to come. I cannot think of any faults or additions that could improve this game, but we’ve not yet played the second game of the series, Eastern Wonders, so my views may change. Anyway, Chris won by a good margin but time over-ran so I missed the first 30 minutes of the cup final. Congrats to France and I’m sure Val will be happy for a long time to come!
Posted by Snowydog at 06:59 No comments: