A collated list of games we have played is tabulated below. The list is primarily aimed at providing me with a detailed record of my boardgaming activity, so that I can spot and understand trends and favourites. It also sparks my enthusiasm for games I overlooked and want to play more of. The first figure is the number of times a game made it to the table, whereas the superscript number is the number of actual games played.

In sharp contrast to my wargaming activity, this year has seen a bumper crop of boardgames played and a wide range of differing games. Elaine and I have played many more two player games due to COVID19  and these feature strongly in the above list.

There were a number of ‘stand-out’ games this year. My favourite must be the classic; Castles of Burgundy. The mechanisms work nicely and the pace of the game accelerates, so that by the later rounds players struggle to achieve all they want. A close second place Glen Moree; the roundel system works really well and the game scales nicely for 2-4 players. The next game that deserves mention is ‘Western Legends’ with the ‘Ante Up’ expansion, which just adds more of the good stuff. Finally, we got ‘Targi – the Expansion’, which is not really an expansion but a version 1.5 of the original Targi. I’m not sure which I prefer as both are excellent.

So, a very busy and good boardgame year, and I’m looking forward to the coming year.

Posted by Snowydog at 04:13 No comments:

The sixth year of my blog has now been completed and the number of hits has dropped slightly, maybe people are getting bored with blogging. The recent changes to Blogger have been a backward step in my view; I have trouble posting pictures, I cannot gain geographic data on views etc.

The main purpose of my blog is to keep a diary of my wargaming activities for my own record, and I’m happy that others may find this interesting.

The games I have played this year are listed below:

This year my wargaming has been severely curtailed due to COVID19, but I am surprised I have not played more solo games in the time of lockdown. The wargame highlights of the year was getting some underplayed armies on the table again, especially my fantasy figures. So in summary 2019-20 has been a very quiet year. I continue to say that I must play more regularly, but life just seems to get in the way and COVID19 does not help!

Posted by Snowydog at 03:52 No comments:

I have not played an opposed wargame since lockdown in late March this year. Restrictions are slowly lifting, so Ian kindly invited me around to his house to play a game of Sword and Spear (S&S). We used his figures and army lists. I choose to be Later Greeks with lots of hoplites, generally poor quality, and a reasonable numbers of cavalry and light troops. Ian played the Persians who had more cavalry and, crucially, a strike force comprising scythed chariots and an elephant. 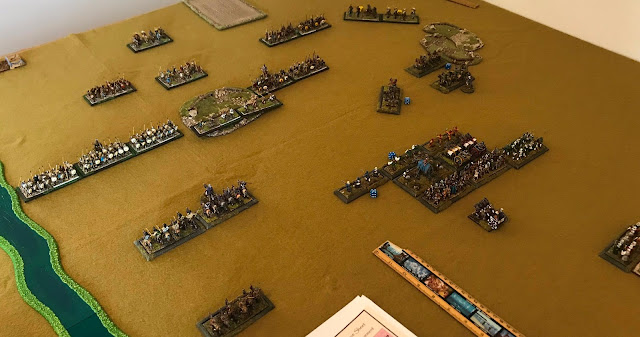 When playing hoplites I am naturally concerned about my flanks, particularly when my hoplites are poor, meaning forward movement is OK but any fancy manoeuvres are nigh on impossible! I was therefore surprised when Ian deployed a river which narrowed the battlefield and gave me one secure flank to deploy against. I was able to deploy a strong hoplite line with my cavalry protecting my potentially exposed flank. 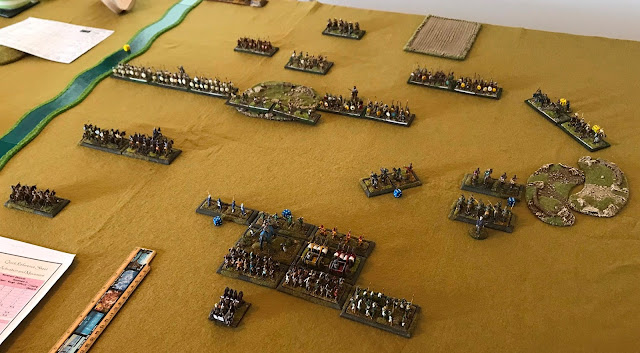 The battle opened with the light troops and flanking cavalry. I have never found shooting to be very effective using S&S, but Ian’s dice rolling showed me the error of my ways! Although I had lost most of my light troops, I had blunted Ian’s flank move and the hoplite line remained firm. Next, Ian’s shock troops piled in and I must admit to some trepidation at this point. The ‘Dice Gods’ turned against Ian, and the Persian scythed chariots bounced and the elephants failed to squash my peltasts. I think both Ian and I thought the game was up for the Persians, but never trust the dice! My peltasts eventually died but I was not concerned because my sole elite hoplite unit was covering the situation as planned. Unfortunately the demise of the peltasts did place a shock on the end unit of poor quality hoplites who were promptly charged by Ian’s elite cavalry (no worries). The combat result was bad and I had 3 discipline tests to take (again, no worries), and I roll three ‘1’s! Result a dead hoplite unit, a dead general and suddenly my front was opened up. My army just fell apart and defeat rapidly ensued.

An enjoyable game that swung one way then another. I think my mistake was to sacrifice my skirmish troops too early and with no specific objective in mind. This leaves you with a deficit which means it only takes a few lost units of formed troops before you are staring defeat in the face. Anyway, it was great to roll some dice again and I must thank Ian for arranging the game and taking the photos. More photos were taken but I'm having great troubles Blogger at the moment and adding photos is proving impossible. I look forward to hosting a return fixture.

Posted by Snowydog at 06:49 No comments:

Review – Sword & Spear – Fantasy (Mark Lewis, Polkovnik Productions, 2017) Readers of this blog will be aware that I like the original version of Sword & Spear (S&S), and that these are one of my go-to rules for Ancient gaming (the other rules I tend use are Impetus and To The Strongest). They are a ‘top down’ set of rules with a comparative dice combat mechanism. They keep both players actively engaged and force tough choices about dice allocation and where to focus on the battlefield. Unusually, they are also equally good for both opposed and solo game play. Normally I am wary of rules spread (i.e. adapting one set of rules to fit another period/genre) because frequently the result is a mess, often losing the best ideas and introducing needless fluff. When I saw the fantasy version of S&S (S&S-F) at a show (remember them!), I was intrigued enough to buy a copy but not so enthralled that I felt the need to get them to the table immediately. Lockdown has provided me with the opportunity to try them out solo. I have now played 3 games using my 6 different 10mm Warmaster armies. How do they fare? Essentially the original Ancient rules remain intact and the fantasy elements are added on to this solid foundation. These fantasy elements can be broadly described as 3 groups: new unit types, new characteristics, and new rule areas. The new unit types include Swarms, Beasts, Large Beasts, Monsters and Heros. Whilst the combat values differ depending on the unit type, they do share an independence from direct command control. This allows Swarms and Beasts to make sweeping flanking manoeuvres, threatening the enemy rear zone. They are not hard hitting but, due to their numbers, they take a bit of time to eliminate. Large Beasts and Monsters remain a battleline unit, not too overpowering but one that the enemy needs to contain. I have yet to play using a Hero. I like these additions to the rules and think they work well to promote the fantasy feel of the rules. I have not yet figured out the best use for these new units, but give me time! As far as new characteristics (fear, poison, frenzy, power attacks etc.), there are too many to discuss here. In keeping with the base S&S rules, they are fairly simple and fit in with the game play easily (it just takes time remembering them). The new rule areas are more substantial. (a) Flight is a major development allowing such units freedom of the battlefield, but having 2 different altitudes is maybe an over-elaboration. I think opponents camps may suffer and fortification may become the norm. I have yet to experience air-to-air combat, but flying creatures don’t seem to succumb much to ground-to-air missiles as they fly over. Once behind your battleline, you are likely to suffer attacks from the front and rear. (b) Magic is a core element of any fantasy rules and S&S-F magic is generic; 3 levels of magic-user and no ‘race-specific’ spells, just 4 basic spells (attack, protection, boost, rally/heal). In my games so far the attack and protection spells have rarely been used, most focus is on boosting and rallying units. You also soon realise that magic-users are best kept slightly back from the frontline, so they can influence multiple units. There is a 5th type of spell (summoning) which is a very useful way of bringing on off-table units a critical stages of the game. (c) Undead is a new and very different army type with additional rules. Units do not benefit from the normal action dice boosts, but instead require magical boosting from commanding necromancers. Necromancers can also increase the action dice scores which is a nice and powerful change. Undead units are also ‘brittle’ in combat; they ignore the first discipline test but additional discipline tests are automatically failed, which means combat can prove unpredictable. Overall I think the rule additions all work and don’t adversely affect the basic S&S game. They do convey a ‘fantasy’ flavour to the armies and mechanisms without overwhelming the battle. I don’t feel I have explored the full nature of the changes yet, and I’m sure I missed some of the nuances in tactics I could employ with the new unit types. I’m therefore keen to get a few more games under my belt once lockdown ends. The games I played solo were: Dwarf versus Orc/Goblin: A winning draw for the Dwarves. The game involved little magic and could easily be viewed as a clash between a well-equipped, regular force against a barbarian horde (Roman v Gaul?). Elf versus Undead: A magic heavy game in which the small, elite force of Elves easily vanquished the Undead legions. Actually, it was not so one-sided; the Undead fought well, but one turn of incredibly bad dice turned the tide and the Undead legions suddenly cracked. Empire versus Skaven: By this stage I felt confident enough to introduce a couple of house rules to the game. I wanted Skaven (and Orc) magic to be more unpredictable, so I introduced a +/-AvD feature into the cost of spell casting for these 2 races. If the magic user did not have sufficient points for the spell, then he is eliminated. This certainly makes use of magic more problematic with these races and I think worked well. I also introduced a new rule for the Skaven Doombell which, when rung, essentially causes Skaven units within a variable distance to automatically become frenzied. This introduced the degree of madness I want from a Skaven army, but will require a few games to see if it is right. Anyway, the Skaven scraped a narrow win.
Posted by Snowydog at 08:46 No comments: